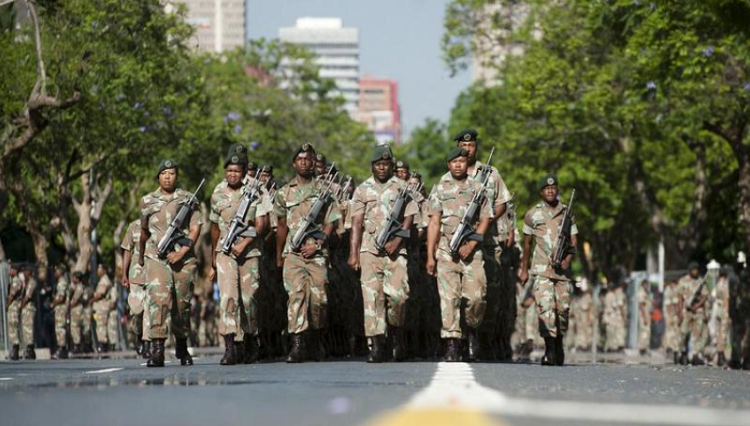 About 25,000 members of the National Defense Force of South Africa (SANDF) will be sent to tackle the violence and looting that has engulfed KwaZulu-Natal and Gauteng.

Defense Minister Nosiveve Mapisa-Nkakula says the proposal to increase the number will be submitted for approval. Mapisa-Nkakula briefed Parliament’s Joint Standing Committee on Defense on the current situation in the two provinces.

“So, as things stand now, President, we have agreed that we do not need to say 75,000, but we also do not have to stick to the 10,000 proposed by the President that we should find a middle ground sooner. Because you also do not want to mobilize in the name of mobilization, because our mobilization must also be informed by the continuous assessment of the situation on the ground. So now we have applied for the deployment of a plus or minus 25,000 members. So, in other words, we are trying to find a middle ground between the 75,000 and 10,000 proposed by the president, “the minister said.

Acting Presidency Minister Khumbuzo Ntshavheni, meanwhile, called on members of the public to remain calm as the government does everything possible to restore peace and normalcy in the country.

“However, we are receiving positive reports that the deployment of an additional 5,000 law enforcement agencies is beginning to reap positive results, as we see fewer reports of violence and robberies. Currently, 5,000 SANDF members are already deployed on site. Law enforcement officers, assisted by the military, work tirelessly to ensure that the country returns to peace and stability. “

Ntshavheni also called on communities not to do so panic, amid fears of possible food shortages due to unrest in the country.

The acting minister says that during his visit to various parts of Gauteng, communities have expressed concerns about food shortages, but says there is no need to worry at this time.

Ntshavheni says people should avoid the panic of buying as the government works with the National Consumer Goods Council to ensure there is no drought.

“We call on the public to remain calm and restrained during these difficult times. The government is working with the Consumer Goods Council to ensure food security. If we have members of the public who flock to shops and malls to buy food, we also risk the spread of COVID-19. ”

Ntshavheni, meanwhile, defended the cabinet after allegations that security and economy cluster ministers were being held low during recent protests and ongoing looting in the country. Ntshaveni says the reason ministers have visited different communities is to assess how much the damage was caused in Gauteng and KwaZulu-Natal.