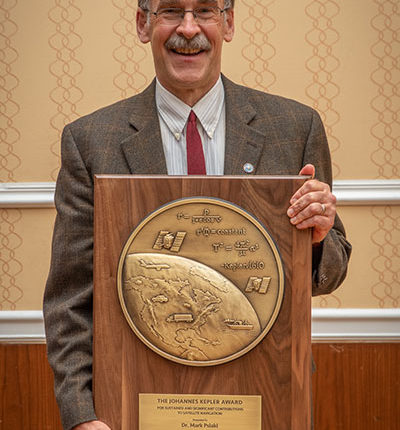 Mark Psiaki received the Johannes Kepler Award for setting a standard of rigor, clarity and depth in dealing with key issues in the evaluation and processing of positioning, navigation and synchronization (PNT) signals.

The Johannes Kepler Award recognizes and honors the individual for his constant and significant contribution to the development of satellite navigation. This is the highest honor awarded by the ION satellite department.

Psiaki’s real-time software radio experience also allowed the development of a spooler grown in his research team. He oversees the development of counterfeit detection algorithms based on cross-correlation of unknown P (Y) codes and based on arrival direction recognition.

Psiaki is the leading designer / analyzer for signal processing for the iGPS program, which combines downlink signals in the Iridium L-band, GPS signals and inertial navigation system (INS) data to improve GPS performance against congestion. Recent navigation work based on low Earth orbit satellites (LEOs) brings together observers from an existing global communications constellation with INS and other sensor data to provide a GPS backup.

DPsiaki has contributed greatly to the modeling, evaluation and detection practices applied to GNSS, including the study of phase modeling of GNSS carrier for space applications. His campaign to decode the GIOVA-A L1 BOC PRI code (1,1) enabled Galileo receiver manufacturers to test their systems before ESA published the codes. The work of his ionospheric scintillation team led to the first commercially available scintillation simulators.

He is a former winner of the ION Burka Award, the Tycho Brahe Award and the Boeing Prize. He is an associate of both the AIAA and the ION. The satellite department of the Institute of Navigation (ION) also presented Lakshay Narula with its Bradford W. Parkinson Award for his dissertation “Towards a safe and sound PNT for automated systems.”

The Bradford W. Parkinson Prize is awarded annually to an outstanding student in the field of GNSS. The award, which recognizes Parkinson’s for his leadership in creating both the GPS and ION’s satellite division, includes a personalized record and a $ 2,500 fee.

Any ION member who is a graduate student who has completed a degree program with an emphasis in GNSS technology, applications, or policy is eligible for an award.