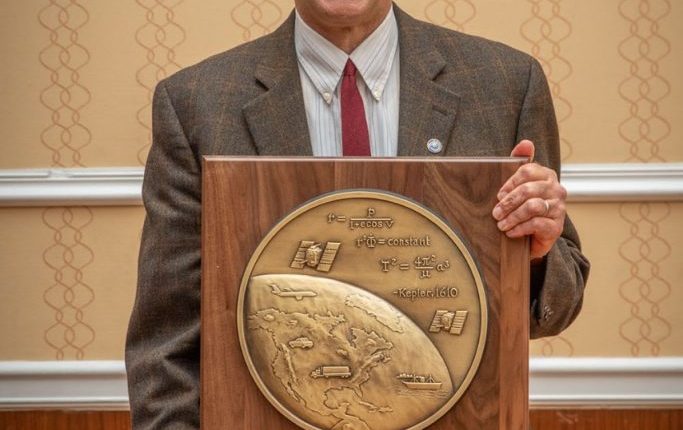 Virginia technology professor Mark Psiaki has been honored with a prestigious international award from the Institute of Navigation for setting a standard for rigor, clarity and depth in dealing with key issues with signal evaluation and processing in positioning, navigation and time.

Psiaki recently received the Johannes Kepler Award at the ION GNSS + 2021 conference, held in St. Louis, Missouri, in late September. The Kepler Award recognizes and honors an individual for his or her significant and sustainable contribution to the development of satellite navigation. This is the highest award given by the satellite department of the Institute of Navigation.

“I feel like I’m walking in the air,” Psiaki said. “This is the highest honor given by the navigation community. The announcement was a big surprise and it was a great honor for me to accept the award personally, among my peers, past winners and giants in this field. ”

Psiaki is president of Kevin Crofton’s faculty Aerospace and ocean engineering at Virginia Tech and a distinguished scientist in dynamics and control. Its research concentrations are in navigation using the US Global Positioning System (GPS) and other Global Navigation Satellite Systems (GNSS), GPS / GNSS spoofing and jamming (when opponents may try to disrupt location, navigation and time decisions ) and the relationship of the spacecraft and the determination of the orbit. He was nominated by his former doctor. student Todd Humphries, who currently works as a professor in the Department of Aerospace Engineering and Mechanical Engineering at the University of Texas at Austin.

His experience in real-time radio software also enabled the development of a spooler cultivated in his research group. He oversees the development of spoofing detection algorithms based on cross-correlation of unknown P (Y) codes or encrypted precision codes and on the direction of arrival detection.

Psiaki was the lead signal processing designer and analyzer for the iGPS program, which combines downlink signals with an Iridium L-band, GPS signals, and data from an inertial navigation system to improve GPS anti-jamming capabilities. Psiaki’s recent work on navigation based on low-Earth orbit satellites brings together observers from an existing global communications constellation with inertial navigation systems and other sensor data to provide a backup to GPS.

Another contribution from the Psiaki study shows how Doppler-based navigation can replace pseudo-range navigation if it is implemented using a large LEO constellation.