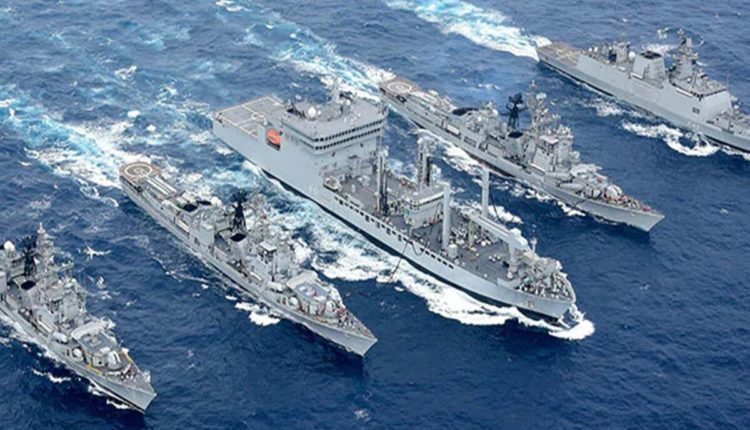 By SDR News On Dec 4, 2021
Share
The naval forces at sea face a complex three-dimensional threat from air, ground and underground offensives, and accordingly each of the naval platforms within the fleet plays a vital role. (Photo source: Twitter / @ PRO_Vizag)

As India celebrates 2021 as Suarnim Vijay Warsh to mark the 50th anniversary of the 1971 victory, December 4, 1971 is a precious golden moment in the history of the Indian Navy. On that date, Indian warships carried out one of the most ingenious and daring attacks on Pakistan to mark their place in the world’s navy. The success of the naval attack showed the professionalism demonstrated by the men in white and the insight of the naval leadership.

The region’s geopolitics has evolved over the past five decades. Today, the Indo-Pacific region holds the world’s attention with a specific focus on the role of India. Fleet responsibility has grown far beyond Indian waters and capabilities against an adversary that also developed as a military superpower during that time and is hellishly inclined to use international waters to carry out its expansionist agenda. The waves of the Sino-Indian border battle at Galvan in 2020 were strongly felt in Indo-Pacific waters, leading to the emergence of many joint and interoperable multinational task forces stationed by like-minded nations. The new era also sees the emergence of stronger Indo-Pacific alliances such as QUAD and AUKUS. India’s regrouping in the Indo-Pacific region for the final leadership position in the arena shows a nascent authoritative operational presence in the future.

Despite the dark clouds of the pandemic, last year’s border crisis prompted the Navy to make military efforts to bolster its combat capabilities by launching aircraft carriers, large warships, submarines and naval aircraft. With regard to maritime relations, peacetime activities have been urgently replaced by establishing newer links with global naval forces, strengthening old ones and working together with world powers. For such future roles in the Indo-Pacific region, the Navy’s Naval Capacity Outlook Plan (MCPP) could provide a second local aircraft carrier (IAC) from a budget allocation point.

The naval forces at sea face a complex three-dimensional threat from air, ground and underground offensives, and accordingly each of the naval platforms within the fleet plays a vital role. The unique design of a destroyer, frigate, submarine or aircraft carrier makes such commitments a threat not only to protect the fleet’s own assets, but also to launch a tripartite offensive against an enemy on the surface, below the surface or in the air. The Navy’s MCPP for the next 15 years is currently being reviewed for release next year and will highlight the 10-year Integrated Capability Development Plan (ICDP). The ICDP, which is being prepared by the DMA (Department of Military Affairs), is expected to determine the command of the maritime theater, its administrative orientation and basic technologies. The Maritime Theater Command, developed as a joint capability for three services, will be a powerful response against a common adversary. The Navy is developing INS Karwar as a key naval institution for the command of the Naval Theater.

With the progress made by the Chinese navy through a stable and well-funded warship construction program, India’s naval power and technology are also feeling the heat. China is now aggressive in its international intentions, whether diplomacy or military, and the possibility of a naval battle or confrontation at sea in the future requires the Indian navy to be always vigilant by using surveillance techniques (such as space, UAVs, signal reconnaissance, etc.). .). China’s ongoing aggressive exercises in the South China Sea to dictate terms to neighboring countries through the use of naval militia forces are some of the problems that have the potential to bring the IOR closer. The Chinese fishing fleet already has a significant global influence through IUU (illegal, unreported and unregulated) fishing activities with the intention of being a militia, and this today extends to the waters of the South Atlantic near South America.

Efforts of the local population through dual-use technologies

Recently, the ambitions of the Indian Navy to own 200 ships in its fleet by 2027 have been converted to 170 ships. With local warship construction agencies such as MDL and GRSE, India already has a capacity for sustainable shipbuilding. The Indian Navy is one of the few in the world that has the ability to build niche naval platforms such as aircraft carriers and submarines. It can also integrate any weapon and system obtained from multiple sources aboard a locally constructed warship or as retrofitting as part of the ship’s Mid Life Update program to maintain an advantage over the enemy. With the push of Atmanirbhar Baharat, it can be expected that the local component in warships is likely to exceed 80-85%. This will be crucial to the military capabilities of the Indian Navy. However, Indian industry needs to focus more on providing rigorous marine quality and maturely designed products for reliable continuous operations in an unforgiving marine environment.

Although the Navy’s long-term plan has been in place for about two decades, the impetus for the creation of technically advanced systems such as navigation aids (Navaids), marine communications systems, naval guns, marine engines and gas turbines, etc. it is still far from being realized. Deck has launched naval drones, artificial intelligence in naval battles, space surveillance, a secure private 5G network for machine-to-machine communication are some of the other solutions the navy has been looking for for some time.

Somehow, the joint industry-academy ecosystem was moving in a spiral of laboratory tests, delaying naval inspections at land test sites, not to mention stricter on-board inspections. Although it may take some time to solve this techno-managerial problem, the development of dual-use technology by public and private agencies can be considered a fruitful initiative for local defense development efforts, such as a merchant ship’s hardened navigation system. naval ships. In this way, a dynamic ancillary sector for the construction of merchant ships, including manufacturers of ship equipment and systems, can become a provider of technologies for the deployment of warships such as major propulsion systems, power generation, navigation and communication systems, etc. .

While the role of the Indian Navy is being visualized in Indo-Pacific waters, the Navy is also preparing against attacks on the infrastructure to maintain warships in the virtual domain. Ships, submarines and seaplanes are highly dependent on maritime communication infrastructure. DRDO recently handed over the EW package “Shakti” to the Indian Navy, but progress in the EW package has been rapid due to the enemy’s ability to outsmart what is unfolding, thus requiring the ability to continue to revolutionize such technologies. The threat to critical space-based navigation, surveillance and communications networks for warships is a reality today and requires building space resilience. With such multidimensional threats, combined with challenges related to EW, cyberspace and space, the Navy’s task of remaining effective in the Indo-Pacific region requires resources in terms of combat platforms and modern infrastructure.

SSN – the weapon of choice in the Indo-Pacific region

The construction of the SSN (Corps Classification for Nuclear Attack Submarines) under AUKUS is a clear sign that the Indo-Pacific region is seeing more and more of this long-range stealth submarine weaponry, which is being deployed to seriously deter China and its silk ship routes. China also has an SSN with exactly the same intention and possibility of a second strike. Chinese SSNs today sail in IOR waters without being challenged, as these boats remain undetected even by space surveillance techniques. For India, although conventional submarines have played a strategic role against adversaries closer to the Indian coast and adequately consolidated Pakistan’s naval power, a stable SSN program will be key to an effective operation closer to the Indo-Pacific side in the future. region.

Strong deterrence in Indo-Pacific waters will support India’s position against any wrongdoing by China on land, air or sea. The technologies deployed by the Indo-Pacific Multinational Naval Task Force are some of the best in today’s maritime world, and India cannot be abandoned. Although it is desirable for more naval platforms to become a powerful force in the Indo-Pacific region, technological solutions such as software-defined radio (SDR), tactical data connections, AIP (independent of air propulsion) for silent underwater operations, naval version of the LCA and ALH are part of the well-understood war-winning equipment that has been under development in India for many years, but must now be delivered to the Indian Navy in an appropriate form that meets naval operational challenges and helps transform India in a superior naval force in the region.

The author is a strategic analyst with a strong interest in technologies related to C4I and Multiplatform Multi-sensor Data Fusion (MPMSDF) solutions. ).

Take live Stock prices from NOW, If, US market and the latest NAV, a portfolio of Mutual funds, Check out the latest IPO news, Best performing IPO, calculate your tax on Income tax calculator, guess the market Top profits, Top losers & The best equity funds. Like us on Facebook and follow us Twitter.

Financial Express is already on the Telegram. Click here to join our channel and stay up to date with the latest business news and updates.

Tactical data link market to be driven in part by demand for unmanned, study says