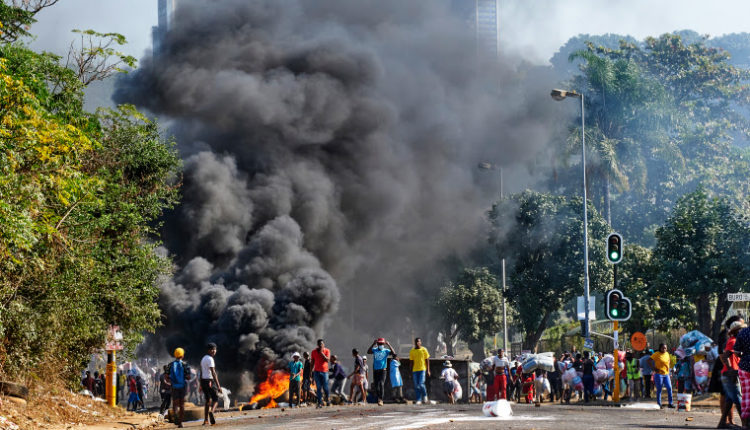 Protests began in at least two provinces, KwaZulu-Natal and Gauteng, on July 4th, starting for the imprisonment of former President Jacob Zuma but have entered into general robberies and riots, according to news reports.

Demonstrators and looters attacked at least four radio stations in the community overnight and today and robbed and attacked journalists covering the unrest over the past 10 days, according to news reports and journalists who spoke to the CPJ.

“The unrest and civil unrest in South Africa is the biggest news in the country and the media must be free to cover it without fear of attack so that the public can be informed at such a crucial time,” said Angela Quintal, coordinator. under the CPJ Africa Program, in New York. “Even as long as they are committed to stopping riots and looting, law enforcement cannot turn a blind eye to how journalists are attacked and threatened while doing their job, and they must ensure that those who do so are brought to justice. responsibility. “

Late last night and early this morning, unidentified people attacked at least four radio stations across the country, robbed their offices and forced them out of the air, according to news reports,, statements of the commercial sites, journalists who spoke to CPJ, and a statement from the South African National Editors’ Forum, a group of editors and senior journalists.

These retail outlets include:

Alex FM station manager Takalane Nemangove told CPJ via the messaging app that the attackers vandalized the station and “deprived the radio station of everything and left only documents.” He said a presenter and a security guard who were in the building at the time managed to escape unharmed.

Nemang added that a supporter in Alexandra had offered his home to use the station and hoped it would return to the air tomorrow.

Unidentified people vandalized the transmitter, studios and offices of Mams Radio and stole equipment from the station, according to a statement from the store reviewed by CPJ, and news reports. The station said it was “off-air until further notice” and said police were investigating the attack.

West Side FM CEO Goodhope Ledwaba told EyeWitness News that the looters broke the doors and windows of the station’s office and stole broadcasting equipment, including computers.

Intokozo FM posted photos of his Facebook page vandalizes his studio; the station, which usually broadcasts live on its Facebook page, has not posted updates from these photos.

Separately, on July 3, in the city of Nkandla, in the province of KwaZulu-Natal, a member of the ruling Association of Military Veterans of the African National Congress Umkhonto we Sizwe interrupted Samkele Maseko, a political reporter for SABC public television, while he was broadcasting a coverage of support for former President Zuma, according to news reports,, video from this show,, and another statement from the editors’ forum.

This video shows an unidentified man in camouflage blocking the camera that captures Maseko’s broadcast and pushing her to the ground.

Also that day, Edward Zuma, the eldest son of the former president, threatened to burn one of the vehicles belonging to the 24-hour eNCA news channel parked in front of his father’s home, according to these sources.

The next day, an unidentified Zuma supporter attacked Maseko while he was reporting to Zuma’s home, according to those reports and a forum statement.

The attacker accused Maseko of being a “sale” and that he was trying to destroy the party leaders of the African National Congress, and slapped the journalist and tried to strangle him, according to these sources. Sbu Ngalwa, chairman of the editors’ forum, stopped the attack and brought Maseko to safety, the forum said in a statement.

Maseko declined to speak to CPJ, saying his employer was dealing with the issue. Phathiswa Magopeni, SABC’s chief executive for news and current affairs, did not respond to calls and several messages through the comment messaging app.

On July 11, unidentified people robbed the SABC news team while covering the Alexandra protests, according to a forum of editors and news reports,, including a report from SABC.

Also that day, unidentified people in the Johannesburg suburb of Hilbrow damaged a camera and a vehicle belonging to a news crew from the private television channel Newzroom Afrika, according to these sources.

Newzroom Afrika news director Kathy Cathodis told the CPJ via a news app that looters broke the vehicle’s windows and tried to break into the car’s branded car and steal its radio and equipment in the trunk. She said the news team was not in the vehicle at the time and was watching people try to break into it; she said a man fired a bullet through the driver’s door.

The report team recovered the vehicle later that day and managed to drive it back to the station, Catopodis said, adding that none of the journalists were injured in the accident.

Newzroom Afrika has not filed a complaint with the police, Catopodis said, as “the police have their hands full at the moment and we will do so once everything is settled.”

Also on July 11, protesters in KwaZulu-Natal threw stones at an SABC vehicle as reporters documented robberies in the area, according to SABC reporter Jade-Lee Polse, who was at the scene and spoke to the CPJ via the messaging app. She said that no journalist was injured by the rocks and that her employer had provided her team with helmets and bulletproof vests.

“We put fear aside and keep the cameras spinning like journalists,” she said.

Separately, on July 11 in Jeppestown, Johannesburg, a protester threatened News 24 reporter Jeff Weeks by saying “you will die today,” Weeks told CPJ via the messaging app.

He said the protesters had sticks and stones, but did not physically attack him; Weeks added that he believed the looters had threatened members of the press because they were filming their mistakes.

National Police spokesman Brigadier General Vis Naidu did not respond to numerous requests for comment sent by the CPJ through the messaging app. News 24 that each situation will be assessed and resolved on its own merit.

Good journalism costs a lot of money. Yet only good journalism can guarantee the possibility of a good society, accountable democracy and transparent government.

For continued free access to the best investigative journalism in the country, we ask you to consider modest support for this noble endeavor.

By contributing to PREMIUM TIMES, you help maintain up-to-date journalism and ensure that it remains free and accessible to all.