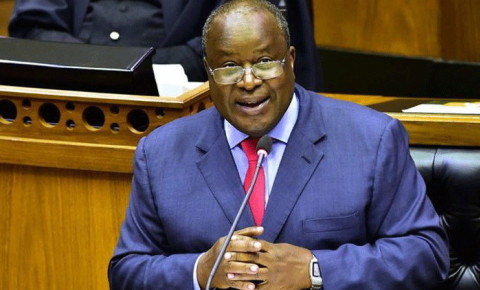 Bruce Whitfield interviews Finance Minister Tito Mboweni about the funding for the package announced earlier by the president.

Finance Minister Tito Mboweni has fleshed out the cost of the fiscal relief package President Cyril Ramaphosa announced on Sunday in the wake of this month’s unrest.

It includes measures to help businesses affected by recent violence and the resumption of the Social Relief of Distress Grant first introduced to support South Africans during the Covid-19 pandemic.

RELATED: More than half of SA population (61%) reliant on social grants – study

Bruce Whitfield interviews Mboweni to find out how government will find this money without further borrowing.

The Finance Minister cites the three immediate problems of the country’s leadership is facing: the Covid-19 pandemic, low economic performance and the destruction wreaked in the recent unrest.

When a country is facing a crisis, its leadership is called upon to exercise leadership and rise to the occasion.

We then have decided as the leadership of this country to put in place a package of measures. In principle, the package is going to be financed from the National Revenue Fund.

We have been fortunate enough to have some better revenue outcomes, particularly from the mining industry, for which we are very thankful. So that R39 billion can be covered, and beyond.

This revenue windfall does not mean Government can go on a spending spree, he notes.

“In fact it is just assisting us to manage our deficit before borrowing difficulties that we had.”

Never in his life, as a liberation fighter, did he ever think he would use the word ‘riots’ in a democratic South Africa Mboweni says.

The National Treasury and Sasria will discuss and find a way of supporting Sasria when they reach the top end of their ability to repay.

Between the DTIC [Department of Trade, Industry and Competition] and the Small Business Department we’ve found R2.3 billon which we’ll use to support small- and medium enterprises.

The Department of Employment and Labor is going to reintroduce Ters … and in discussion with the National Treasury they’ll also find ways to bridge any gaps that might be there.

On the Social Relief of Distress … we’ve agreed after a bit of tussling and negotiations with the president we are going to make sure that this will be reintroduced … up to the end of March next year.

Mboweni also stresses the importance of the Employment Tax Initiative, which should be put back into action.

“One thing I’ve learned … is that if you want to make an immediate impact in the economy, the tax system and tax policy is probably where you should look.”

You can read the full statement issued by the Finance Minister here.

Listen to the in-depth interview with Minister Mboweni below (skip to 4:55):