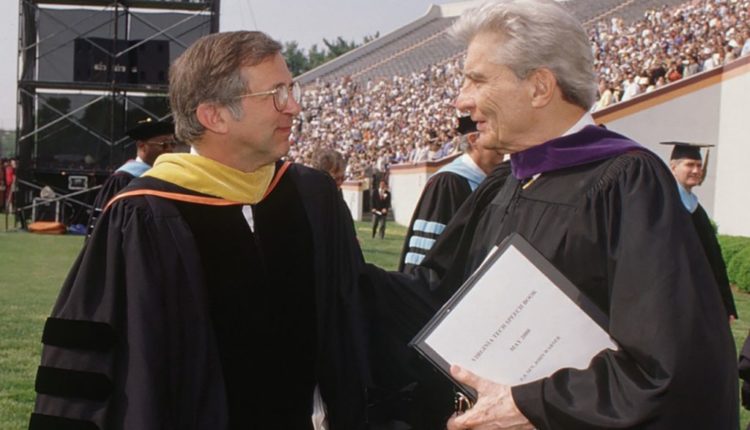 Warner’s support helped launch many important Virginia Tech research projects. Together with VTTI, they include the Naval Joint Integrated Information Technology Initiatives and the Advanced Wireless Integrated Naval Networks, both of which had principal investigators based on Virginia Tech and took place in the early to mid-2000s.

“We put together a few disciplines and it worked out well,” said Stutzman. “I thought it was a big boost for Virginia Tech and it accelerated us to the technology research boom that is starting right now.”

Stefan Duma is Professor of Engineering Harry Wyatt and Director of the Institute of Critical Technology and Applied Sciences. He is known all over the world for developing a rating system for helmets. The roots of this project are in the military work that was defended by Warner.

“He was a strong supporter of our research, in particular the work we have done with the Ministry of Defense on the protection of soldiers,” Duma said. “It was at a time when the war turned into more explosives, more eye injuries. We studied the prevention of head, neck and chest injuries. He supported this project, which laid the foundation for much of [sports] helmet research we are doing now. “

Eric Hallerman is a professor in the Department of Fish and Wildlife Conservation at the College of Natural Resources and Environment. Since 2004, he has been monitoring the Horseshoe Crab Grass Survey, which tracks crab populations along the Atlantic coast from Wachapreague, Virginia, to Atlantic City, New Jersey, and Delaware Bay. The project provides data on the relative abundance of the Atlantic Fisheries Commission in the Atlantic State to ensure that commercial fishing practices do not disrupt sustainable crayfish populations. Horseshoe crabs are one of the oldest known species on earth and are the unique source of a compound known as limulus amebocyte lysate, which is crucial to demonstrating the safety of various medical compounds, including the COVID-19 vaccines currently in use.

“Without John Warner’s help, we wouldn’t have had that start-up money to start and show the value of this program,” said Hallerman, who recalled meeting with a senator’s staff shortly after taking over the trawl research program from former colleague Jim. Berkson. “She asked me 20 questions about horseshoes and they were good questions. I answered them with pleasure. I left and thought, “Wow.”