Philadelphia-based Deepwave Digital has released v.0.5.0 from its Ubuntu-based AirStack distribution for software-defined radio (SDR) applications. The software works on it AIR-T development boards and closed AIR-T embedded systems. Release 0.5.0 is required for the recently announced AIR-T Edge series. The original model AIR-T Edge AIR8201 is on pre-sale at an undisclosed price.

AirStack Architecture 0.5.0
(click on the image to enlarge it) The Jetson GPU allows AirStack to run parallel applications such as AI and signal processing directly on the RF sensor. “This reduces cost and complexity by eliminating the auxiliary computer required by most SDR vendors, and allows processing to be localized with the deployed radio without the need to stream data to a remote processor,” says Deepwave. AirStack comes with an optional AirPack designed to facilitate AIR-T’s TensorFlow RF training.

AirStack 0.5.0 adds support for continuously variable (CV) sampling rate, activated by upgraded interpolation and decimation filters. The filters can be adjusted continuously between 3.9 and 125 MSPS. The feature only works with the new AIR-T Edge or AIR7201 version of the AIR-T with the more powerful Artix-7, which was released after the AIR7101 model we covered in 2019 (see below).

AirStack now supports multiple images of the Artix-7 FPGA firmware installed with the AirStack firmware to protect against unrecoverable board conditions during image loading. There is also improved open source support Konda package and environment management system. Conda, which is now upgraded here to Anaconda 4.10.3, adds support for GNU Radio, a major component of AirStack. Like the AIR-T systems, the AIR-T Edge series is only available in development boards or in closed models, and for the first time the latter can be safely placed outdoors. Like other AIR-T systems, the new model allows SDR applications to process bands above 200 MHz in real time, Deepwave said. 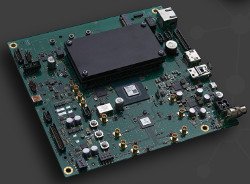 Compared to the AIR7201, the AIR8201 adds internal integration to the GPSDO (GPS Disciplinary Oscillator) module. The new model also offers improved receiver performance, including an extended frequency range from 30MHz to 6GHz (vs. 300MHz to 6GHz). There is also an additional 28 dB gain when receiving for 36 dB plus 2.2 dB figure noise.

Compared to the supplied versions of the AIR-T systems, the AIR-T Edge AIR8201 provides more extensive features for robust processing. They include an operating range of -40 to 85 ° C (compared to 0 to 70 ° C) with a 95% relative humidity tolerance at -10 to 65 ° C (no condensation). The boxes also add 5Grms vibration and 140G impact resistance. The case is expected to be certified for IP56 protection.

The main new addition to the AIR8201 interface is the M.2 SATA storage slot. It is not clear whether this replaces the earlier SATA interface. There is now a microSD slot in place of the SD slot

Like earlier models, the AIR-T Edge is additionally equipped with GbE, USB 3.0, USB OTG and 4K-ready HDMI ports. The system works with a maximum of 25W. The full specifications have not yet been published in AIR-T wiki, but the image shows a serial port and an expansion connector, which is probably used for the previously available DIO.

AirStack 0.5.0 is now available for download to Deepwave Digital customers. AIR-T Edge AIR8201 is available for pre-sale at an undisclosed price. (The original AIR-T boxless board was available for $ 4,995 from Crowd Supply.)