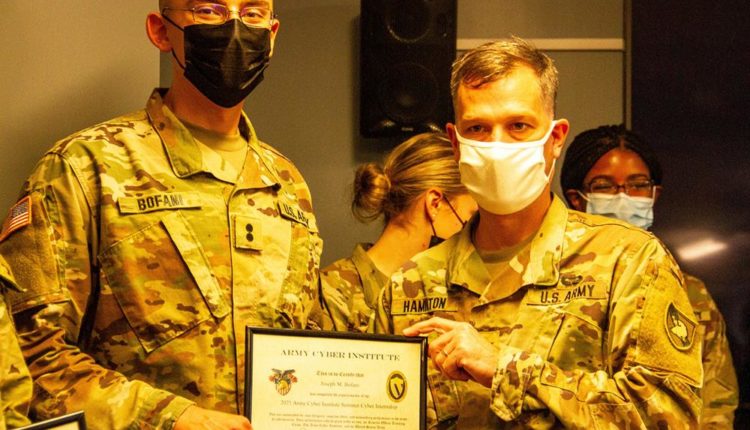 To improve the military’s defense capabilities against malicious cyber attacks, the U.S. Military Academy has facilitated an eight-week summer internship program designed to provide a truly futuristic experience in cyber research to cadets of the Reserve Officers Corps at the Army Cyber ​​Institute.

The ROTC cadets worked in teams of three on various projects ranging from advanced radio communications to the development of an innovative malware detection program.

2023 cadet Megan O’Loughlin, 2022 cadets Param Mehta and Mandip Singh are working on a project called APIAN, a malware detection system and engine that looks for patterns in system calls and alerts the user to malicious activity.

Under the direction of Major John Rollinson, a researcher at the Army Cyber ​​Institute in West Point, O’Loughlin and her team worked with a Linux version of the system that Rollinson created and implemented it on a Windows computer to present the software in -adaptive, easy to use way.

In addition, a line of code is created to remember past sequences of attacks and to warn the user if he is attacked.

“Right now, it’s a smaller defense project and more of an opening program,” O’Loughlin said. “Instead of defending yourself from the next attack, it will warn you that you are under attack, which may allow you to shut down certain systems. In a sense, you are preventing a larger attack and you are more aware of what is happening. Often people don’t realize until they try to access a file two months later that their file was overwritten or deleted two months ago.

In the field of radio communications, the 2022 cadets Joseph Bofani, Preston Robbins and the 2024 cadet Zachary Garfield worked with Colonel Stephen Hamilton, Chief of Staff at ACI, on his project aptly called “Hiding in the Spectrum,” Bofani said.

The project focuses on capturing communications by applying a separate modulation technique used to mask a radio signal to avoid detecting the enemy.

“Traditionally, we see radio waves in the spectrum analyzer as a two-dimensional wave signal rising and falling, but that’s not really what waves look like,” Bofani added. “Radio waves are three-dimensional objects, so we run a program that we’ve modified to capture that wave, and then do a 3D rendering of it.”

“Usually people are just used to watching waves in the frequency domain,” Bofani added. “By combining the IQ data we look at in the time domain, we get that 3D image that is the radio wave in its real form.”

Bofani said one of the most challenging aspects of the internship was studying radio theory. He, along with other cadets, also learned to work with hardware and software on a variety of radio stations, including software-defined radio stations and military and civilian radio stations.

In addition, the cadets also learned Bash’s scripts, Radio Security, how to analyze waveforms, among other basic elements of radio theory.

Subsequently, in the last week of the course, Bofani, O’Loughlin and the other cadets working on their promising projects made a presentation on August 30 to an audience of instructors and researchers detailing all the work, nuances and innovations that went into product development. .

After their presentation, the members of the audience asked questions.
With the culmination of the event, the cadets received certificates for performing the tasks they needed during the internship.

“We would just like to thank all of you for listening, and we would like to thank ACI for this absolutely amazing opportunity,” O’Loughlin said. “I know I’m speaking from all three, and I’m sure I’m speaking on behalf of everyone in this room when I say it was a great experience.”


This job, ROTC cadets receive cybersecurity education at West Point, from Jorge Garciaidentified by DVIDS, must comply with the restrictions set out in https://www.dvidshub.net/about/copyright.

US Army defines next level of networking