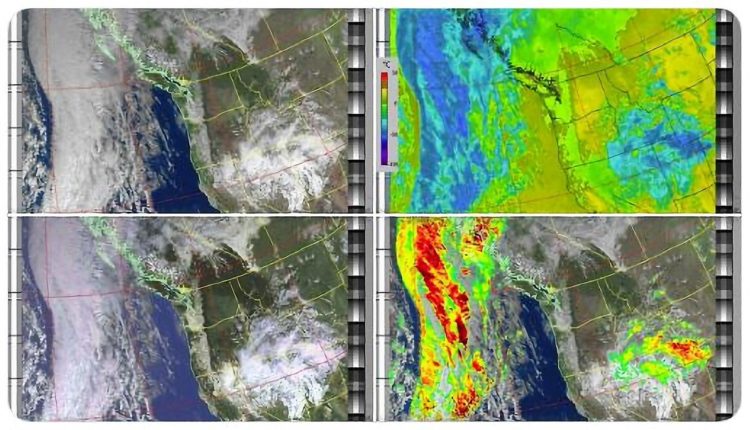 Don’t just talk about the weather, make your own satellite images – BC Catholic

I have previously written about my almost lifelong passion for meteorology – or ordinary weather, if you will – and radio signals ranging from a few hundred kilohertz up to the gigahertz range.

In recent years, I have combined these two interests by creating my own simplified form of a ground station for receiving and processing radio signals and creating my own meteorological satellite images. At one point, I had two such stations in operation, one for imaging from satellites passing west and the other east of my location here in the Fraser Valley, just outside Vancouver.

Some fans of home weather satellite stations laughed at my simple settings: old computers, cheap software-defined radio, and redundant TV antennas. Making everything work turned out to be difficult, time consuming and sometimes frustrating. But none of that stopped me. While I was studying, I kept turning myself off.

My first success came with a station that cost $ 7, so low because I was given different pieces of equipment. I only needed an antenna adapter.

Most recently, due to work being done around my house, I had to temporarily remove two of my antennas, which are designed for weather satellite signals. Then I decided to try to simplify the whole process and instead of using a typical Windows-based computer system, I switched to a Raspberry Pi-based system.

For those unfamiliar with Pi computers, they are very small machines, about two-thirds the size of a paperback book (some versions are as small as a credit card). These machines have changed amateur electronics and data processing around the world, not so much because of their size, but because of their price, well below a hundred dollars. For some versions, the Pi computer can cost less than $ 20.

While the Raspberry Pi range is designed for amateurs and as such, which can lead to a lot of “play” to keep things going, much of the work is needed to insert weather satellite signals into the Raspberry Pi and ultimately for processing by them, is well established. As such, this means that the entire software package needed to create weather satellite images from Pi can be packaged.

I turned to an amateur radio friend in Ontario. He had just gone through the procedure and was now making an “image,” a download available to those who wanted to try their hand at processing satellite weather data with the Raspberry Pi.

I will not deny that there are several technical obstacles to switching to the Pi platform from, say, a Windows-based solution, but they can be overcome in minutes with a little guidance. These steps essentially involve converting the download file into a form that Pi can read. Without going into details here, suffice it to say that this step can be done quite easily. The file must be saved on a microSD card, the card is inserted into the Pi and the microcomputer is turned on.

At this stage, additional hardware comes into play. That means a software-defined radio (SDR), a thumb-sized USB device that costs at most a few tens of dollars, an antenna, and some sort of cable. For the antenna I used an old set of TV rabbit ears. This antenna is really old, with a cast iron base. I found it through the Facebook Marketplace. One arm was broken; I reattached it with some foil and some MacGyver-type work. I just placed the antenna on the balcony ledge on my terrace and pointed it north-south. I attached the antenna to an SDR with a coaxial cable length, unlike the type used to connect TVs to a cable provider.

All that was left was a little tweaking to let the Pi software know about my home Wi-Fi network and my location. Although Pi is a complete computer that can be attached to a monitor, keyboard, and mouse, it’s actually easier to connect to it than – you know – a Windows or Mac computer system. I use a utility called VNC to connect to my Raspberry Pi computers if the need arises.

In addition to their low price, Raspberry Pi devices are extremely stable and reliable. I have one that works with a flight tracking utility; it runs for more than 600 days without intervention, except for two program updates that took all 30 seconds. This Pi feeds data directly to my desktops, so there is no need for a keyboard or monitor.