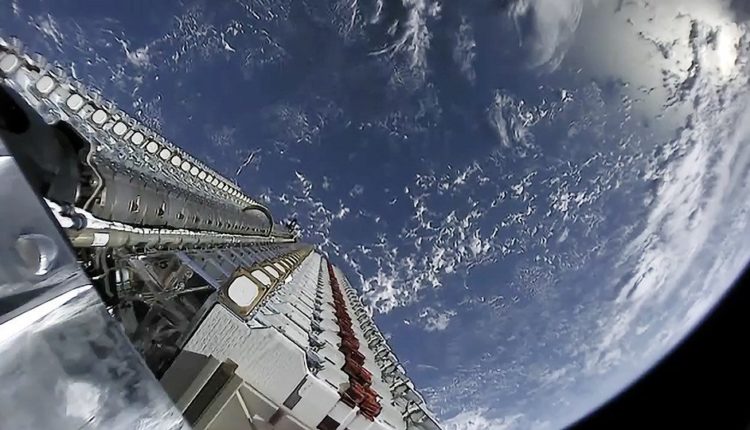 SpaceX’s Starlink satellite system could play a role in the future of 5G. (SpaceX)

As the United States and its partners seek to reap the benefits of 5G networks for future use of national security, the focus is largely on terrestrial security networks. But in that analysis, Melissa K. Griffith of the Woodrow Wilson International Center for Scientists argues that those who worry about 5G security should strive higher.

What do the security, resilience and protection of satellite systems have to do with fifth-generation mobile (5G) networks? Far more than you think.

Much of our collective focus on national security in the United States is on security concerns arising from the terrestrial components of 5G networks (e.g. radio access network, Internet of Things, submarine cables, etc.). Relatively little attention is paid to national security concerns related to the changing role of satellite communication systems within this “network of networks”.

The result is a potentially neglected gap in our current approach to 5G. Importantly, this gap is also a critical opportunity for the United States. If we decide to seize it, we can significantly enhance the security, resilience and security of our communications networks now and in the future.

With that goal in mind, my and Lt. Col. Christopher Hawking’s recent Wilson Center reportTake advantage of the opportunities: Four national security questions to ask about the use of satellites in 5G networks, “A) deepen the development of terrestrial and space communications networks, b) set out the scope of national security risks associated with the use of satellites in 5G networks, and c) identify opportunities for the government to begin assessing and addressing these risks. in practice. Space is in many ways a well-known challenge for critical infrastructure.

We can and must build on these lessons learned, while adapting our efforts to the realities of space.

Why now? Historically, satellite and terrestrial communication networks have developed separately and, although they exchange data, are largely independent of each other. Today, the role of satellites in telecommunications is changing, fueled by the exponential demand for bandwidth and connectivity and activated by the “commodity” satellite system and business models.

To realize the potential of ubiquitous, instant connectivity for a large number of devices worldwide, terrestrial telecommunications systems that rely heavily on buried optical cables will not be enough. Satellites will have to play a much larger role, with terrestrial and space components working in tandem to perform a greater variety of functions.

Given the evolution of supporting technology (mainly satellite and launch technology) and the business models of satellite companies (including satellite systems as a service), this growing role is now possible. This change can be seen today with the emergence of companies such as SpaceX, OneWeb, AST SpaceMobile and Project Kupier, which seek to create destructive low-Earth orbit (LEO) business models, as well as more traditional geosynchronous (GSO) vendors such as Telesat and ViaSat, which are adapting their infrastructure and satellite capabilities to compete for market share with widespread LEO providers. It should be noted that just earlier this year, Lockheed Martin’s space division announced a strategic partnership with the Omnispace launch satellite to jointly build a space-based 5G network, while Microsoft began providing remote data centers using SpaceX’s Starlink network. .

Why are you worrying? Communication networks have long been the target of malicious participants. This is a trend that is likely to continue only in 5G and be exacerbated by concerns arising both from technical funds and from potential vendors building these increasingly defined and decentralized software-defined networks. Moreover, although American competitors increasingly view space as an area of ​​conflict, hereditary satellite systems are known for their uncertainty. Even in newer satellite systems, security is too often a follow-up rather than an integral part of the design, implementation and maintenance of these systems.

What next? The weight and inaccessibility of space create challenges for maintenance and endurance, unlike almost everywhere else we work. However, when it comes to national security issues, many of the same concerns that arise from ground-based critical infrastructure efforts are easily addressed. All stakeholders, including the political community, must avoid the impulse to unnecessarily alter the wheel.

These (not so new) problems fall into two broad areas: protecting the systems themselves and ensuring the security of the data passing through these systems. In practice, these efforts boil down to three categories of concern:

There is also a first-order question that precedes these three concerns: the criticality of the uses that these networks support.

Wherever you are in the political landscape, there are important opportunities for you for these categories of care – ranging from standards to the government as a customer (eg DoD acquisitions) – to strengthen our collective 5G future. By avoiding mandatory requirements documents that lack flexibility and usefulness over time, our report provides policy and community acquisition with a series of guiding questions and an in-depth explanation of why the answers to these questions matter.

Satellites will play a key role in determining our collective 5G future. We cannot adequately assess or address national security concerns related to 5G networks without taking into account the space components of these networks.

Dr. Melissa K. Griffith is a Senior Program Fellow in the Science and Technology Innovation Program (STIP) at the Woodrow Wilson International Center for Scientists and a non-resident research associate at the University of California, Berkeley Center for Long-Term Cybersecurity (CLTC).